KAKANI, NEPAL: On October 27, a 6-member MMICARE team arrived in Katmandu as part of their two day trip to visit and audit the organisation’s Rebuild Nepal disaster relief programme. The two year ‘’assist and empower’’ programme was in collaboration with the APUCEN.

Our ‘’assist and empower’’ programme was aimed at the Sri Gowla Dewi Primary School and surrounding communities which were severely damaged following the April 25, 2015 earthquake measuring 7.8 on the Richter scale.

The earthquake triggered an avalanche from Mount Everest. Barely two weeks later a second earthquake measuring 7.3 on the Richter scale hit Nepal. The back to back disaster left the country and people, lost and bewildered.

MMICARE’’s first phase of assistance involved mobilising dignity kits for women, diapers and milk powder for children. This was parcelled off through the Royal Malaysian Airforce (RMAF) to be distributed in Nepal.

The second phase involved the construction of temporary shelters for earthquake victims especially single mother and the aged.

This was made possible following MMICARE’s urgent request to APUCEN to assist with their Level Two community outreach programme.

With donations from APUCEN members – USM, Kyoto Universiti of Foreign Stuidies, USIM,AIMST, UPSI and KUPUSB – and its own supporters, MMICARE commissioned the construction of 30 temporary zinc shelters complete with solar lights, PU flooring and non-perishable food items for affected families in Kakani, Nepal ahead of the 2015 winter and 2016 monsoon seasons.

Two shelters were dedicated to the Sri Gowla Dewi primary school in Kakani. The shelters which were used as kindergarten classes during the day doubled as sleeping quarters for families at night

In 2016 the Rebuild Nepal project built toilets for the students, repaired the roof and repainted the school.

In early 2017 a French NGO offered to reconstruct a single severely damaged block in the school which had been barred up since the eartquake. The cost of reconstruction was simply too high for MMICARE and we had declined to involve ourselves. It was wonderful to see the new block ready and operational.

In this 2017 final lap of the Rebuild Nepal project, MMICARE was delighted to see the fully functional school. MMICARE and APUCEN donated stationeries and new furniture for the teachers room and had a small unofficial moonlight party for the children.

We were however deeply saddened to see that many families were still living in the temporary shelters we had constructed. We were given to understand that the rebuilding process in Nepal takes time.   - ENDS 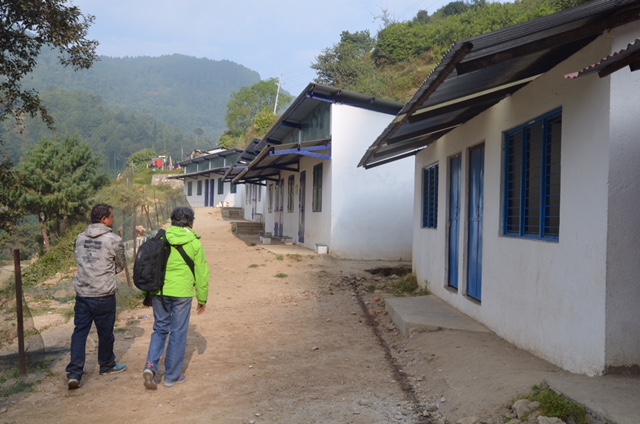